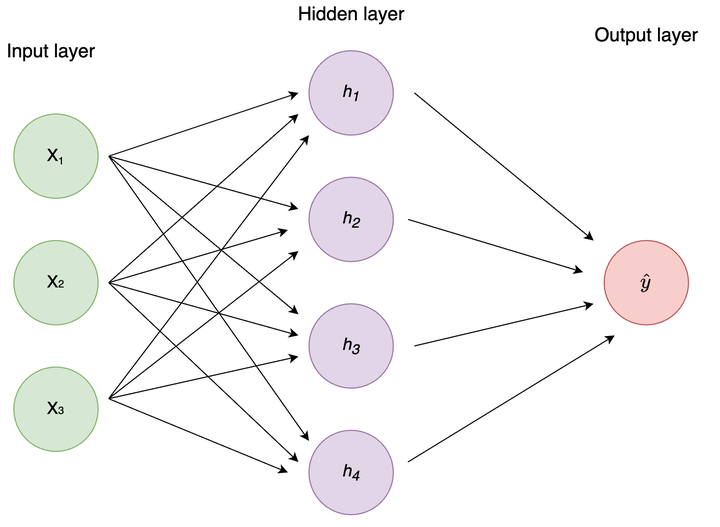 This was created as part of TA’ing the Data Science course for Cognitive Science students. It ended up being fairly extensive so I thought I’d share it here as others might find it useful. The document is a step-by-step walkthrough of a single training exaple of a simple feedforward neural netowrk with 1 hidden layer. Linear algebra is kept out, and emphasis is placed on what happens at the individual nodes to develop an intuition for how neural networks actually learn.

This was originally created using the Tufte-style, but I failed to make the HTML version render nicely here. If you prefer, you can find a Tufte-style PDF version here.

Neural networks (NNs) are all the rage right now and can seem kind of magical at times. In reality, most NNs are essentially just a bunch of logistic regressions1 stacked on top of each other + a clever way of distributing blame for the predictions and updating the weights accordingly. In this handout, we will break NNs down step-by-step to hopefully de-mystify. There are exercises along the way, but I suggest reading through the whole document before doing them to have a better understanding of the big picture.

I have tried to minimize the math and keep linear algebra out of the way. Implementations of neural networks in libraries such as torch, keras/tensorflow etc. use matrix multiplications and other linear algebra instead of what I’ll show you here2. The reason for doing it this way, is that it, at least for me, is far more intuitive to see what happens at each individual node. Once you understand this, understanding how it’s done with linear algebra is not as daunting.

Upon creation of the network, all weights between the nodes (i.e. the links/lines in the image) are initiated with a random value3. When the networks get an input of training examples, the inputs are multiplied by the weights and fed to the next layer of nodes. In our case, each node in the hidden layer receives an input which is a vector of 3 elements: the input times the weight from each input node to the hidden node. Before the hidden node can propagate the signal forward, it has to aggregate it to a single number with a non-linear function.4 This is where the activation function comes in.

Nowadays, ReLU (and its variants) is the most common activation function, but sigmoid is the OG. The equations are as follows:

\[ReLU = max(0, input)\] \[sigmoid = \frac{1}{1+e^{-input}}\] The input in the above equations refers to the net input to the nodes, i.e. the weighted sum of all inputs. All the activation function does, is apply some function to the net input. This becomes the node’s activation and is what is fed to the next layer of nodes in the network in exactly the same manner as from the input to the first hidden layer.

Let’s see a quick example of how to calculate activation for a single hidden node with 3 input nodes. Let’s assume this is the top hidden node in Figure 1, \(h_1\).

Repeat the process for all the nodes in the network and voíla - you just implemented the forward pass of a neural network!5

Notice how similar this is to logistic regression: You have a bunch of input nodes/variables, which have an associated weight (betas), which are combined using the sigmoid (aka logistic) function.

Note: each node also has a bias which is an extra trainable parameter (essentially an intercept). For simplicity we assume it to be zero here.

Hurray, the forward pass is done! The network is just making random predictions for now though, so we need to give it a way to learn. This is where backpropagation and gradient descent comes in. Now, as with any regression model, we need to define some loss function, i.e. how we calculate the “goodness” of the model. The loss function to use depends on the problem at hand, but a common one for regression is sum of squares errors. The equation is very straightforward and looks like this:

From high school calculus, you might recall that the derivative of a function is simply the slope of the function. 6

The plot above is an illustration of the loss (e.g. the SSE) given different combinations of weights between nodes.7 As the image illustrates, if we are unlucky we can get stuck in local minima, i.e. an area where the gradient is zero, but that is not the global minimum, i.e. the combination of weights with the lowest possible loss. This is just a fact of life for neural networks - you are in no way guaranteed to find the optimal solution. Different weight initializations will lead you to find different minima, which can vary substantially.

Anyhow, the way we minimize the loss is to calculate the gradient of the loss function in our current state and make changes to our weights based on this. The sign (+ or -) of the gradient tells us which direction to go, and the magnitude tells us how large steps to take. In essence, we start at some random point on the graph above, and slowly make our way down, until we hopefully end at the green dot.

The procedure differs slightly if the node is an output or hidden node. Let’s go through it for output nodes first.

In our case, we had a single output node, so let’s assume we’re doing binary classification (is it a 0 or a 1?).8 For binary classification, it makes sense to use the sigmoid as activation function for our output, as it squishes the values to a range between 0 and 1. To calculate the derivative of the loss function with respect to the weights (and biases), \(\delta\), we need to use the chain rule which eventually gives us this9:

Using SSE and sigmoid activation function we get this:

Where \(a\) is the node’s activation, i.e. the value we get after using the activation function (sigmoid) on the sum of the weighted input.

Figure 3: Figure 4: Calculation of \(\delta\) of the output node

Easy! Notice that the value of \(\delta\) is positive. This is because our prediction (0.6) was below the label (1) and we should therefore increase the weights to get closer to the correct prediction. Had the label been 0 instead, \(\delta\) would have been a negative number. Essentially, \(\delta\) tells us how we should make changes to our weights to get closer to the optimal state as defined by the loss function.10

The clever thing about backpropagation is that weights are updated based on their magnitude. That is, if the error is large, large activations will change more than small activations, as they “contribute” more to the prediction than the smaller ones. As the name implies, the errors are propagated back into the network (what is known as the backward pass). Calculating \(\delta\) for the hidden layer is the first step in this process.

Now, to distribute blame for the prediction.

As mentioned, backpropagation works a bit differently whether you’re calculating weights coming in to an output or a hidden node. For weights coming in to the output nodes, the weight changes are proportional to the learning rate \(\eta\), the activation of the predecessor node, and the \(\delta\) we just calculated. To continue with our example from Figure 1, let’s calculate the weight changes for the weight going from the top hidden node \(h_1\) to the output \(\hat{y}_1\).11

Pretty easy right? To calculate the weight change for weights going into hidden units, we simply multiply the learning rate, \(\alpha\) with the \(\delta\) (the derivative of the loss function with respect to the weights) and the activation at the preceeding node.

We’re getting really close to having trained our little NN on a single example. All that’s left is calculating the weight changes for the weights from the input nodes to the hidden nodes. Fortunately, the procedure is largely the same as for the output units.

First, we calculate \(\delta\) for the specific weight and node again. However, since we are now in the hidden layer, we don’t have access to the true label anymore. Instead, we use the \(\delta\) from the succeeding layer (the output node) multiplied by the weight from our hidden node to the output!

Notice that the value of \(\delta\) is substantially smaller than what it was at the output nodes. This means that the weight changes from the input nodes to the hidden nodes will be even smaller. Deep networks can run into the problem of vanishing gradients, i.e. \(\delta\) becomes so small that weight changes are negligible. ReLU is far more robust to the problem of vanishing gradients than the sigmoid function, which is one of the reasons for its success.

We already defined our 3 input nodes and their weights going to \(h_1\). Let’s update them.

And we’re done! Rinse and repeat for the rest of the hidden nodes and you just trained one step of a neural network! For a standard feedforward neural network, this is all that is going on - just repeated a lot of times.12 When this process has been conducted for each training example, the neural network has gone through one epoch. You usually stop training after a certain number of epochs, or once you reach a stopping criterion.13

To sum up, here are the steps:

I took an elective in Neural Networks a couple of years ago, where part of the exam was to implement a NN from scratch. You can see my code here. It’s implemented in much the same style as this document, i.e. no linear algebra, but lots of for loops. After working through the exercises in here, it will likely seem quite straightforward to you.

Kenneth wrote an implementation based on Nielsen’s to do classification on the MNIST digits dataset. You can find it on Blackboard.

Fast.ai: Practical Deep Learning for Coders - A great and comprehensive course on neural networks. You will learn to implement them from scratch using pytorch and pick up tons of useful knowledge along the way. In particular, check out the part on SGD in chapter 4 for a great introduction.

Kriesel, D. A Brief Introduction to Neural Networks. http://www.dkriesel.com/en/science/neural_networks. - A quite nice book on the fundamentals of neural networks. A bit old by now, but the foundations are the same. 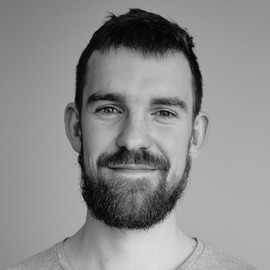 I am PhD student at the Department of Clinical Medicine at Aarhus University. I study how to use natural language processing and machine learning to improve patient outcomes in psychiatry. I am broadly interested in applying machine learning to solve real world problems, and in advancing open-source software.